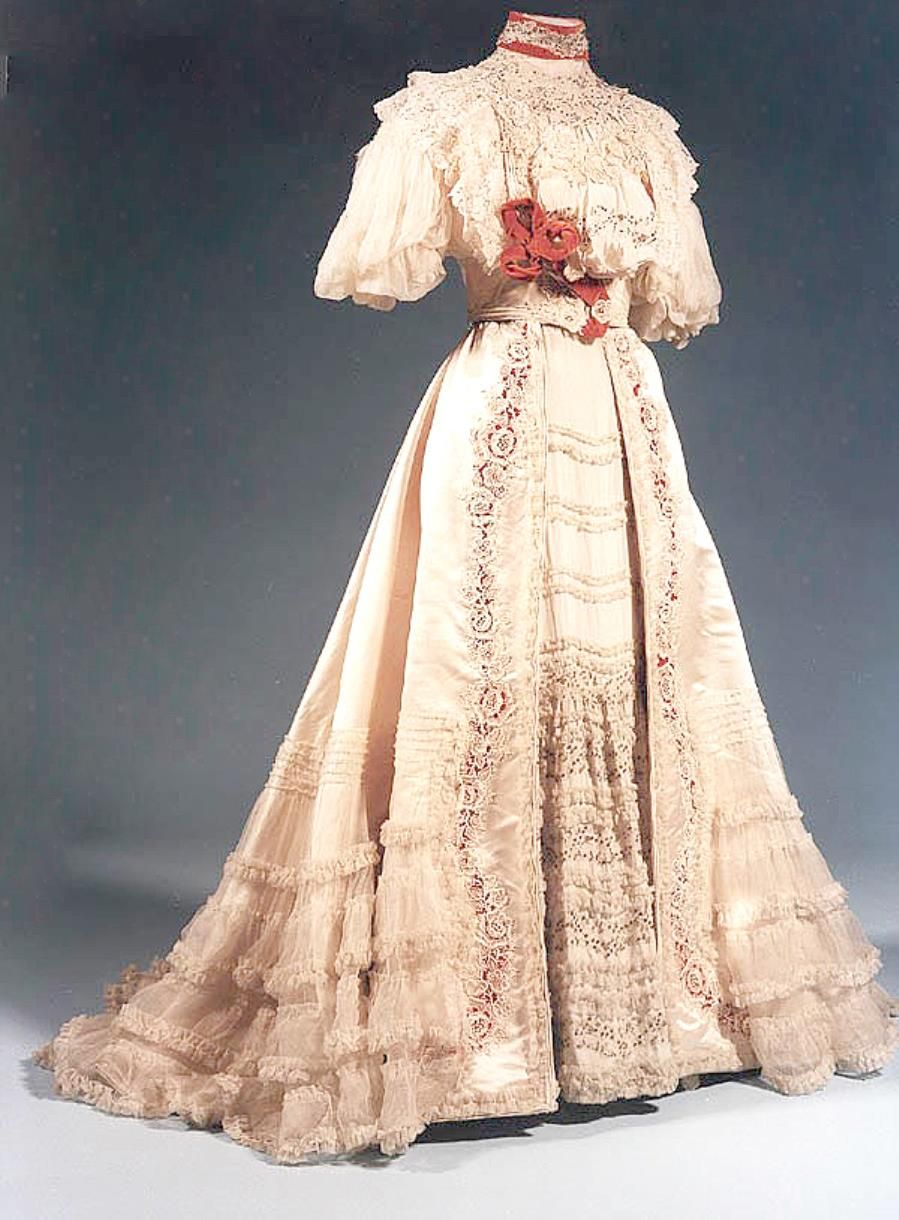 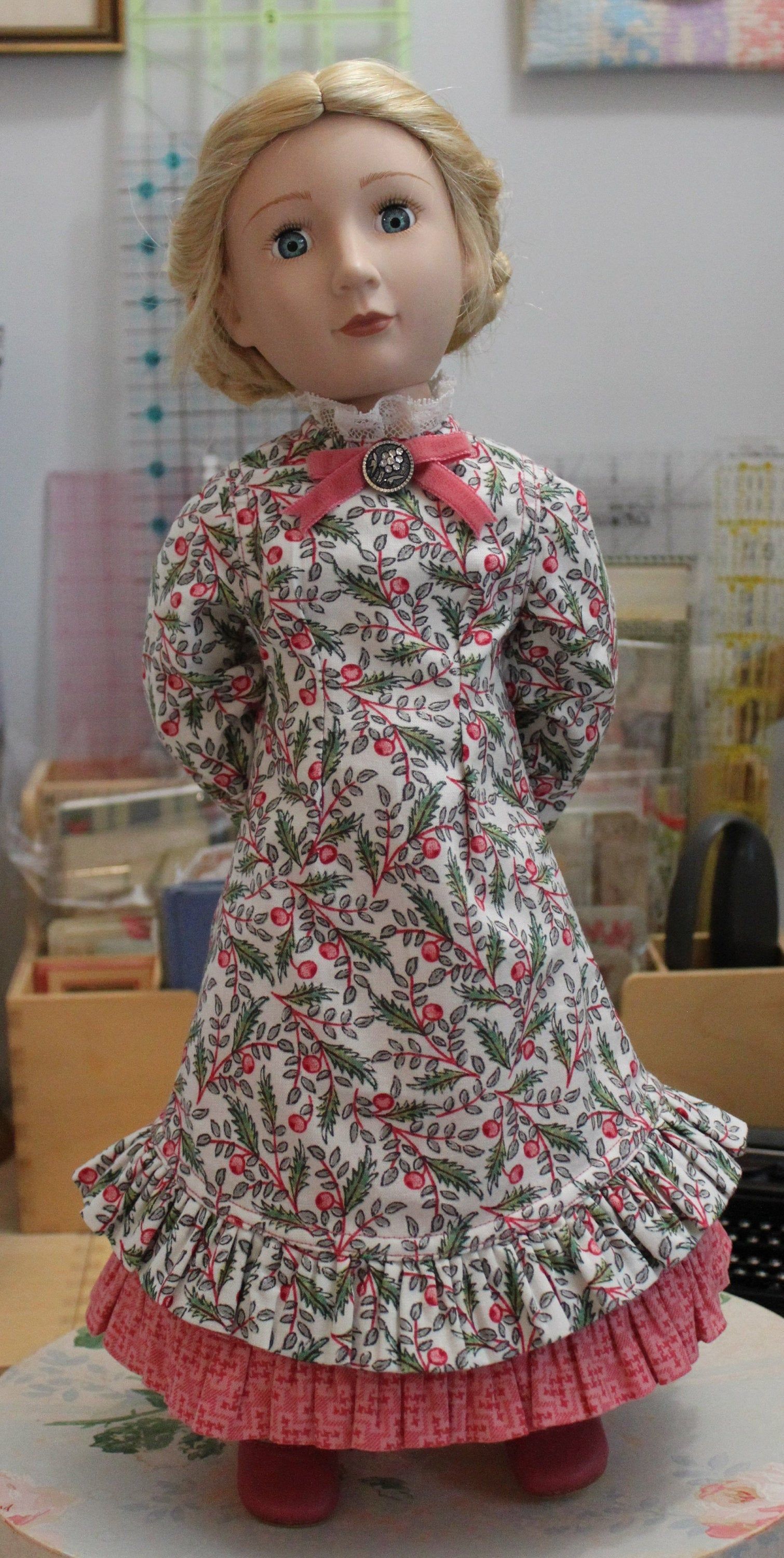 An 1880's style Prairie dress and underskirt made to fit a 16" doll such as "A Girl for All Time." The Prairie dress is made from a modern reproduction floral cotton print -- green leaves and red berries on a white background. The neckline and cuffs are trimmed with a vintage, handmade bobbin lace edging. A detachable pin, made from vintage rose velvet ribbon with a metal & rhinestone vintage button, also decorates the neckline. The hemline is finished with an angled ruffle in the same reproduction print. The dress closes in back with metal snaps and six (6) vintage mother of pearl buttons for decoration only. The underskirt is made from a modern cotton in a contrasting rose "cross stitch" print. The sixth photo shows part of the skirt under the dress. The hemline on the underskirt is also finished with a ruffle from the same rose print. The underskirt closes in back with metal snaps. All exposed seams are serged. And all materials (modern and vintage), other than the velvet ribbon, are pre-washed (by me) before incorporating into these special outfits in my smoke-free, cat-free studio. (The only items for sale in this listing are the dress, underskirt and detachable pin -- my doll and her shoes are not included.) (This dress is based on Thimbles & Acorns' "Mary & Laura" Dress & Underskirt pattern -- inspired by The Little House on the Prairie books and available from PixieFaire.) My model, Amelia, is wearing English Rose shoes made from the softest glove leather by Sashapotamus and are available on Etsy. Free shipping in the United States. For International Customers (including Canada) -- the USPS significantly increased international postage rates in the last few years, making it very expensive to ship packages internationally. I apologize for the inconvenience, but if you are interested in purchasing an item from my shop, please contact me so that I can provide you with the shipping costs to your country. If you are looking for an exceptional gift for a special young girl or doll collector, you will find much to your liking in my shop -- especially if you are a lover of vintage textiles and trims, like me. Thanks for looking and please feel free to convo me with any questions you may have. 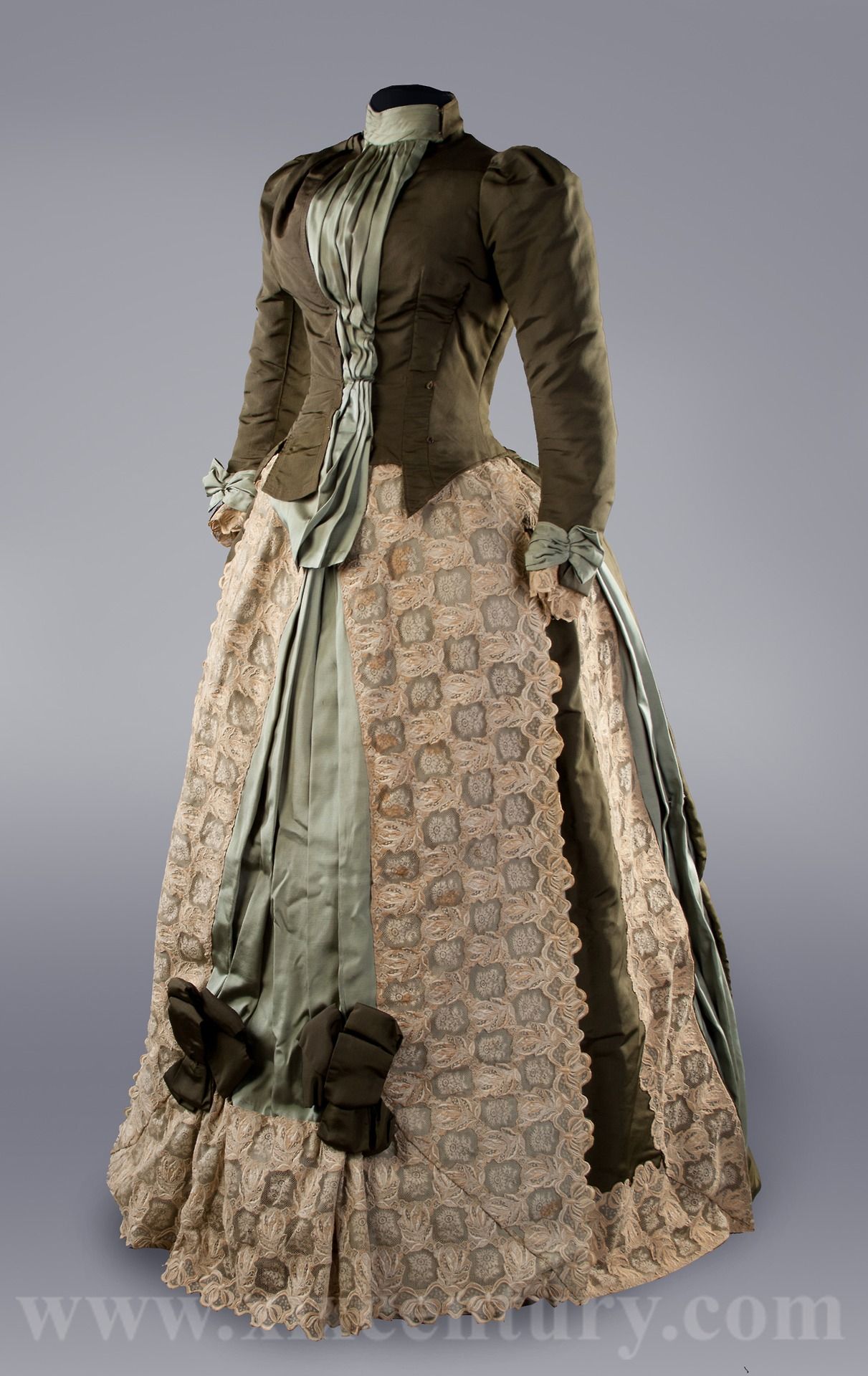 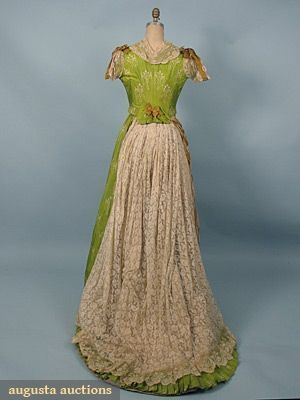 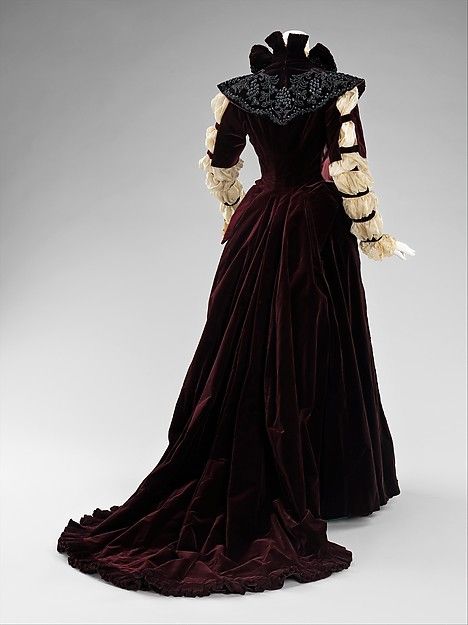 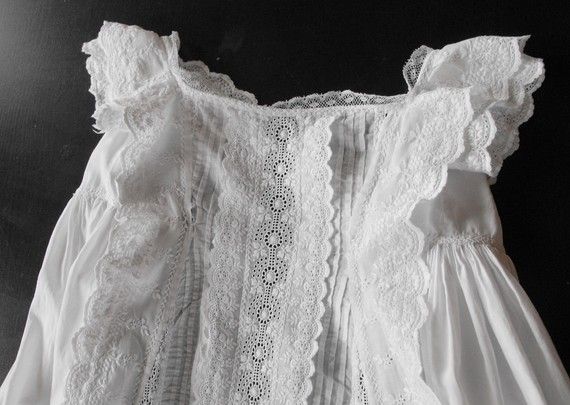 Your place to buy and sell all things handmade

~Lovely Antique English Christening Gown for a Baby Girl ~ This antique Victorian Christening, (dating to between about 1880 to 1910, from England is just exquisite. This dainty and elegant gown has been made of fine cotton batiste. This is a classic example of the Victorian model. In this case the dress has been designed with long panels of 'Broderie Anglaise' down the front terminating in a cascade of five ruffles across the bottom of the skirt. Down the entire front from across the back, over the shoulders and short sleeves, to the hem are traditional ruffles ('robings') of embroidery. The hem is finished all around with rows of tucks. The neckline of this dress is cut low so that it is not tight fitting at the neck. This gown is open all the way down the back and closes at the top with traditional drawstrings. A good seamstress could easily make a petticoat to be worn under this gown. An advantage of the open back is that baby can arrive at the ceremony dressed in the petticoat and then the dress put on at the last minute so that it is beautifully unwrinkled. This fine gown is in excellent antique condition. The fabric is snowy white and it is entirely without stain. There are only a very few tiny pin-dot holes in the skirt and a few small and finely made repairs at the back of the skirt. These tiny flaws are hardly noticable, lost in the folds of the gown, and are part of the history of this antique dress. This gown is, for a Christening gown of around 100 years old and of this fine quality, in exceptionally good condition. It is definitely exceptionally beautiful. The gown measures 38 inches long from shoulder to hem, 20 inches around at the raised waist and 8 inches across at the shoulders These measurements are a bit adjustable because of the drawstring closing. This fine antique English Christening gown will come to you freshly hand-laundered using the finest French non-allergenic soap and will be lightly starched using organic rice starch. ~~~~~~~~~~~~~~~~~~ A lovely gown for your baby's Christening and for handing down for generations as a family heirloom. From our FRENCH VINTAGE LINENS AND ANTIQUES shop on ETSY SPRING SALE PRICE !!!$192.50!! ++Ask us about Multiple Payments for this item++ Our Etsy #016 Shipping from France for this item will be $17.50 to anywhere in the world by French Priority Airmail. If you wish to insure your parcel,shipment will be by French Colissimo which includes insurance, a tracking number and delivery on signature for added security. We offer this shipment option at $35.00 which will be less than our actual cost. If prefer this option, please let us know before purchase so we can change the shipping charge. PLEASE REMEMBER THAT WE ARE SHIPPING FROM FRANCE ++++++++++++++++++++++++++++++++++++++++++++++++++++++++++++ ALSO PLEASE FEEL FREE TO CONTACT US FOR FURTHER DETAILS OR MORE PHOTOS. Also we have a large stock of French vintage linens, baby clothes, Christening gowns, nightgowns, bed linens, table linens. Ask us if you are looking for something special. ++++++++++++++++++++++++++++++++++++++++++++++++++++++++++++ These are early days for us here on ETSY . Soon we'll have loads more French Vintage and Antique items listed, SO VISIT US OFTEN! 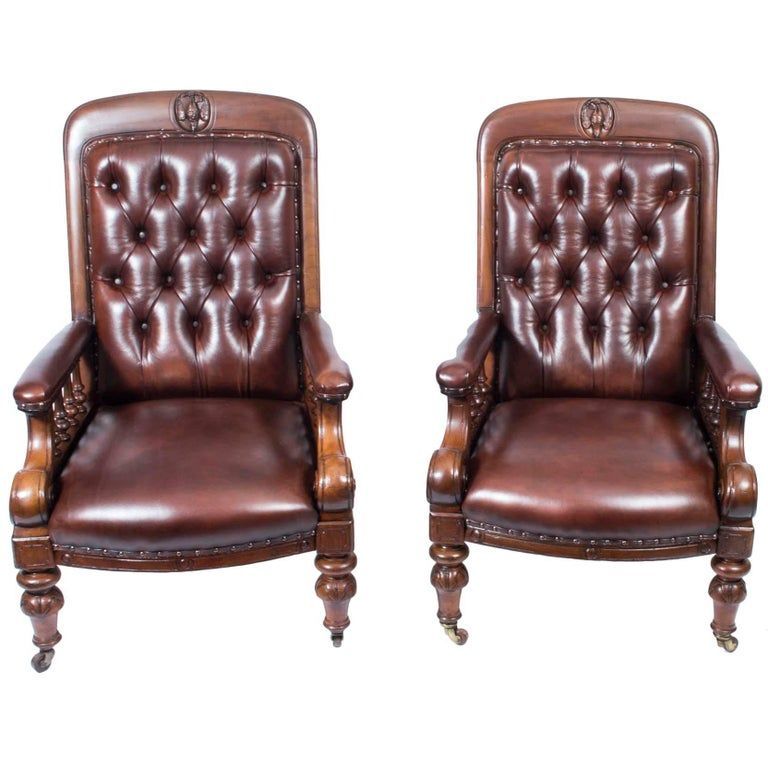 english dresses 1880 #englishdresses1880 This is a handsome pair of antique Victorian mahogany and leather club armchairs, circa 1880 in pair was made from masterly crafted hand-carved solid mahogany with an interesting hand-carved crest of a bird on top of have been reupholstered in a sumptuous chocolate brown leather with button backs and stand on their original brass and porcelain is no mistaking their beautiful and stylish design, which is certain to make it a treasured addition 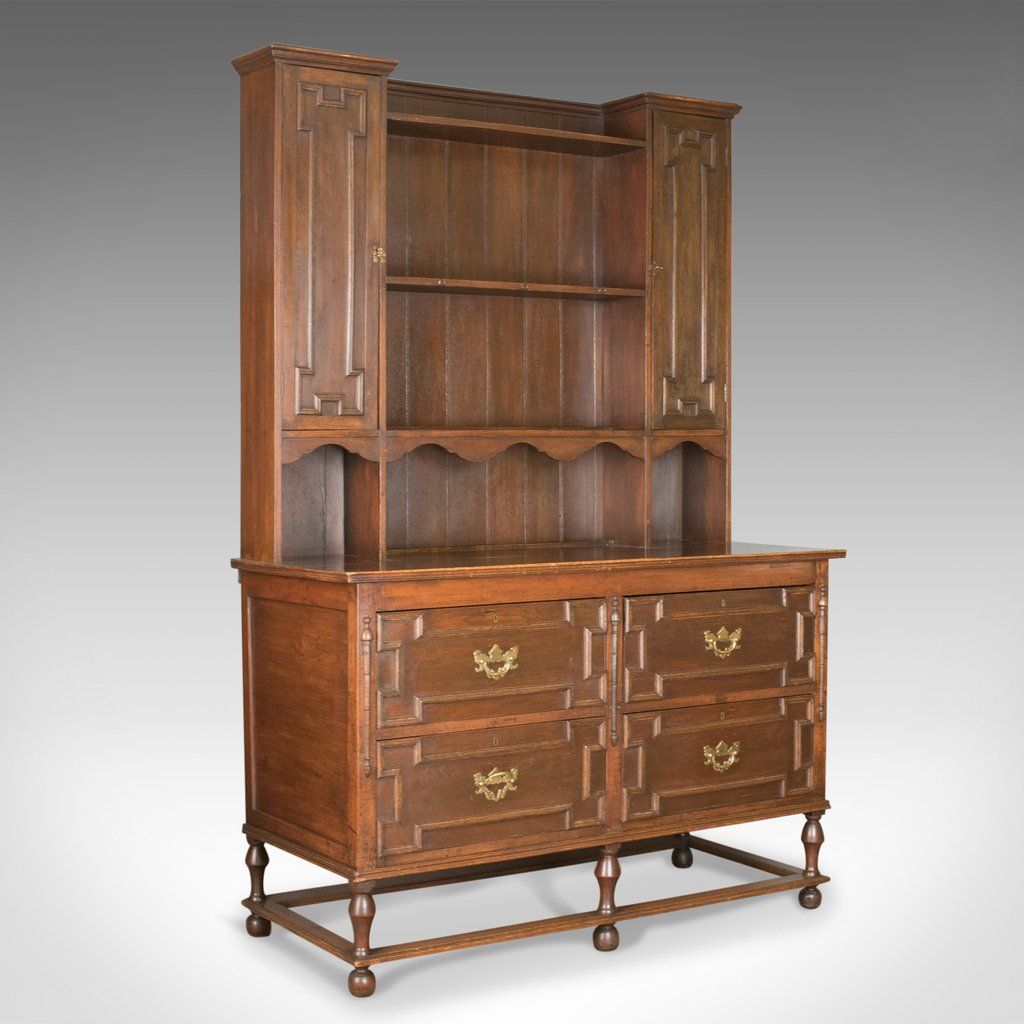 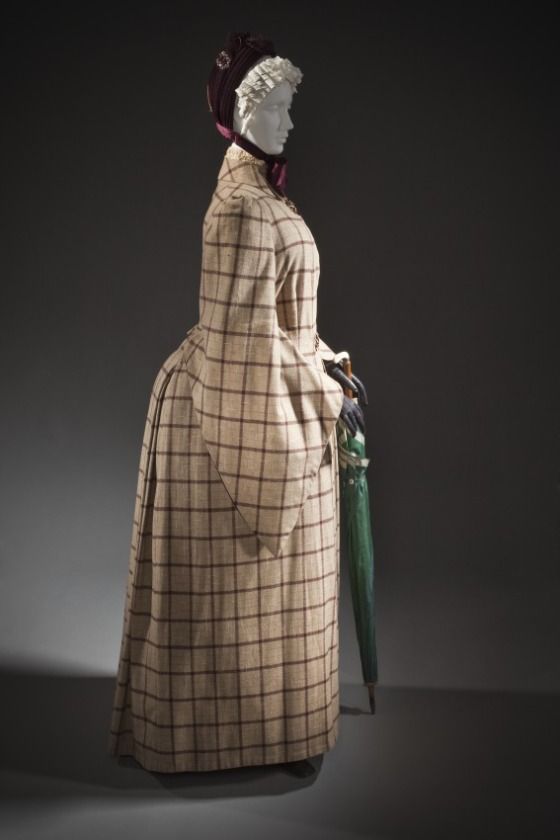 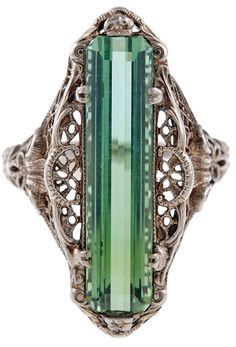 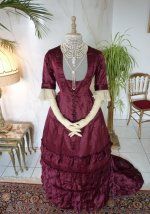 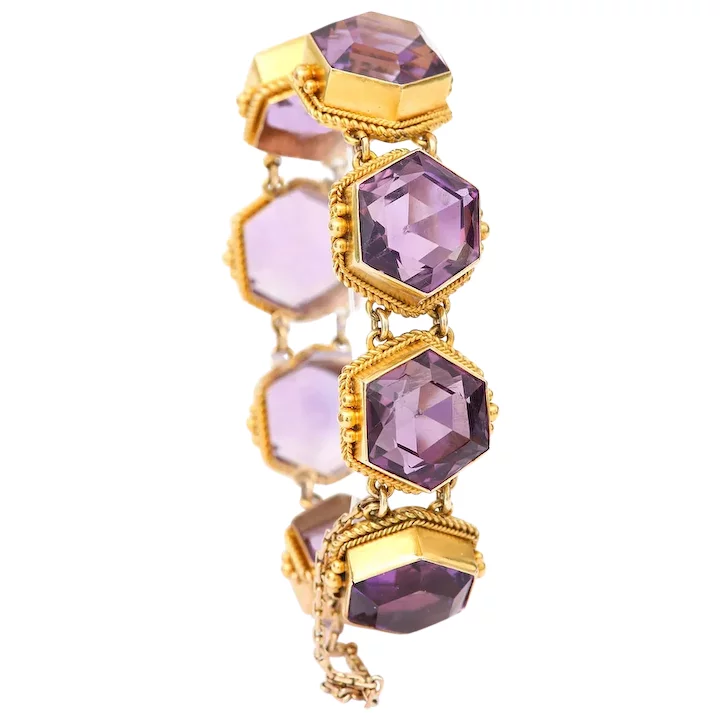 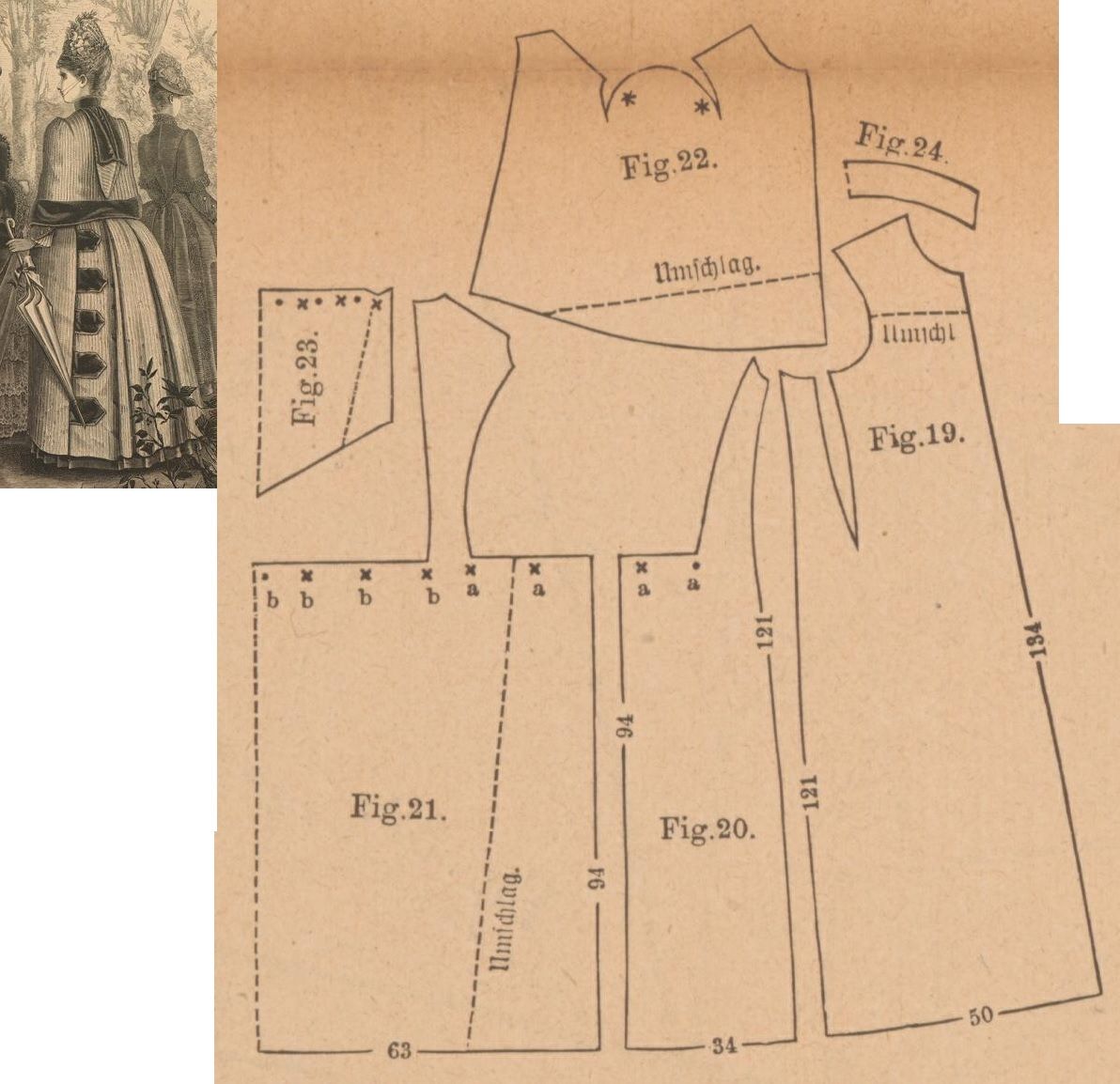 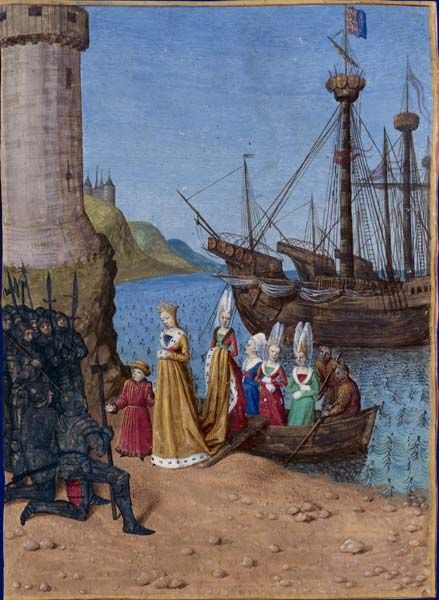 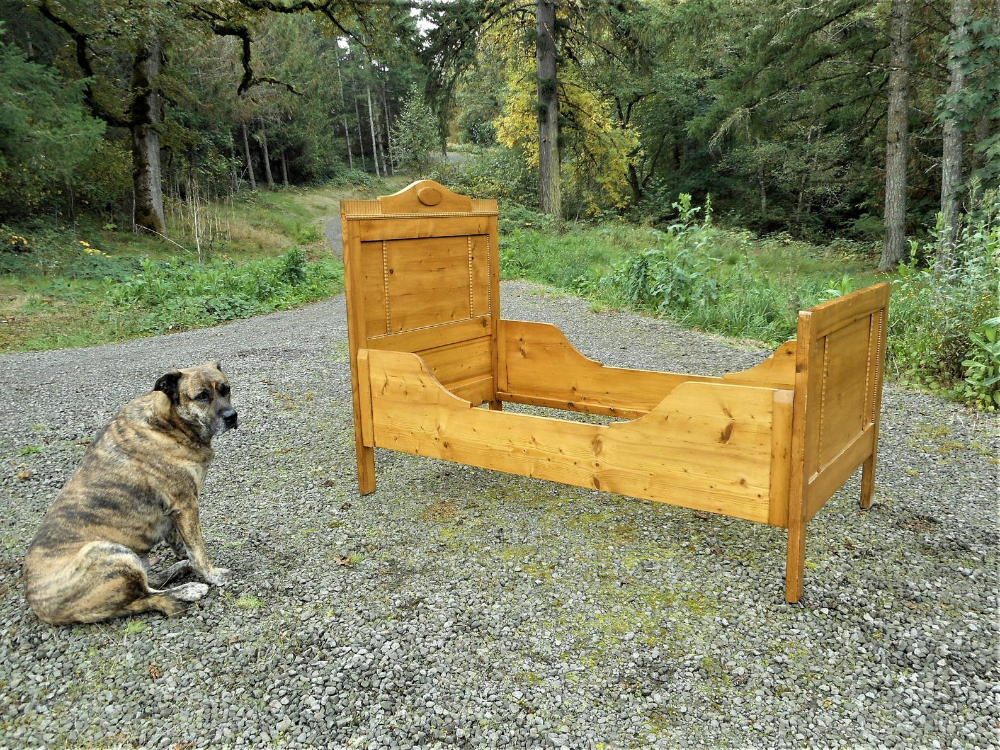 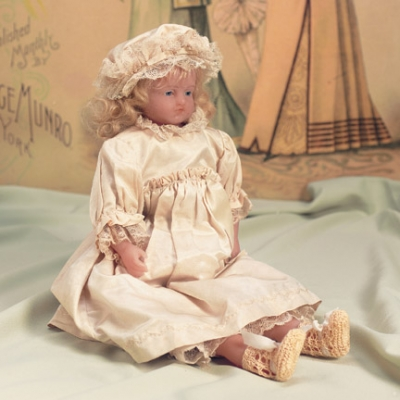 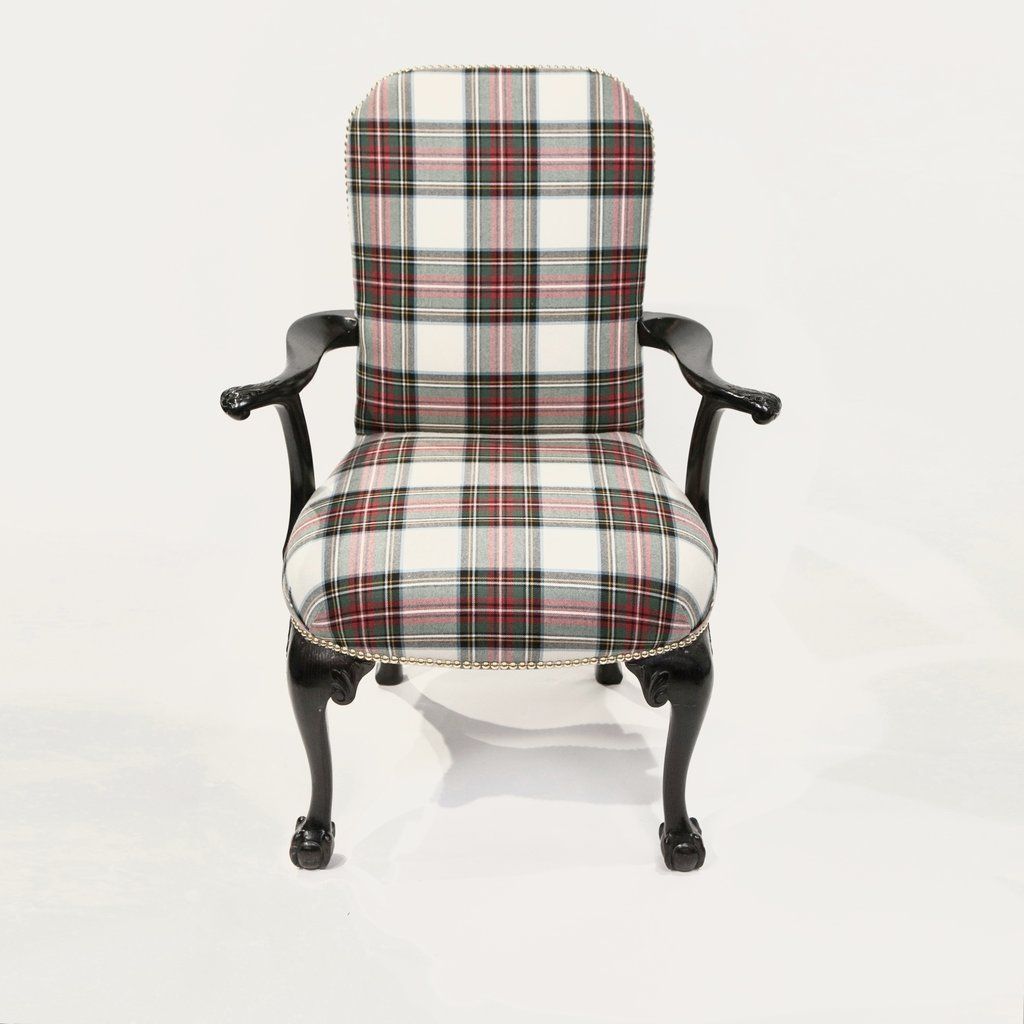 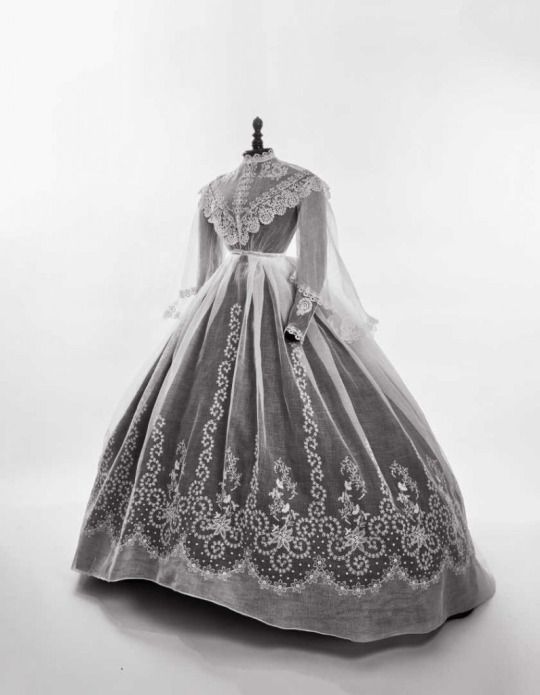 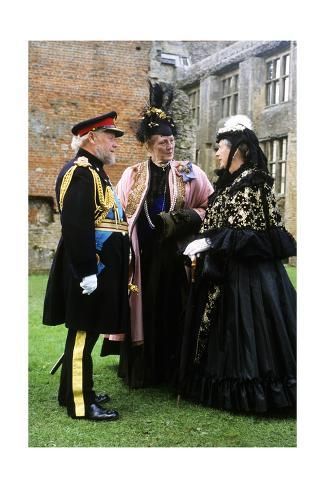 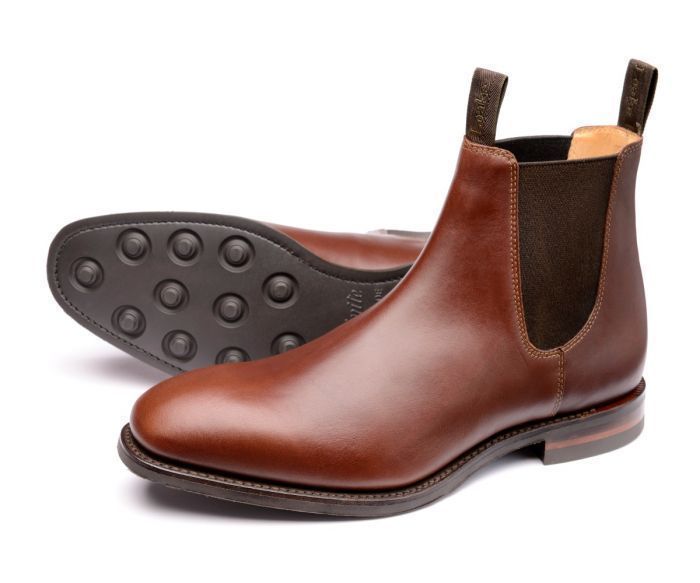 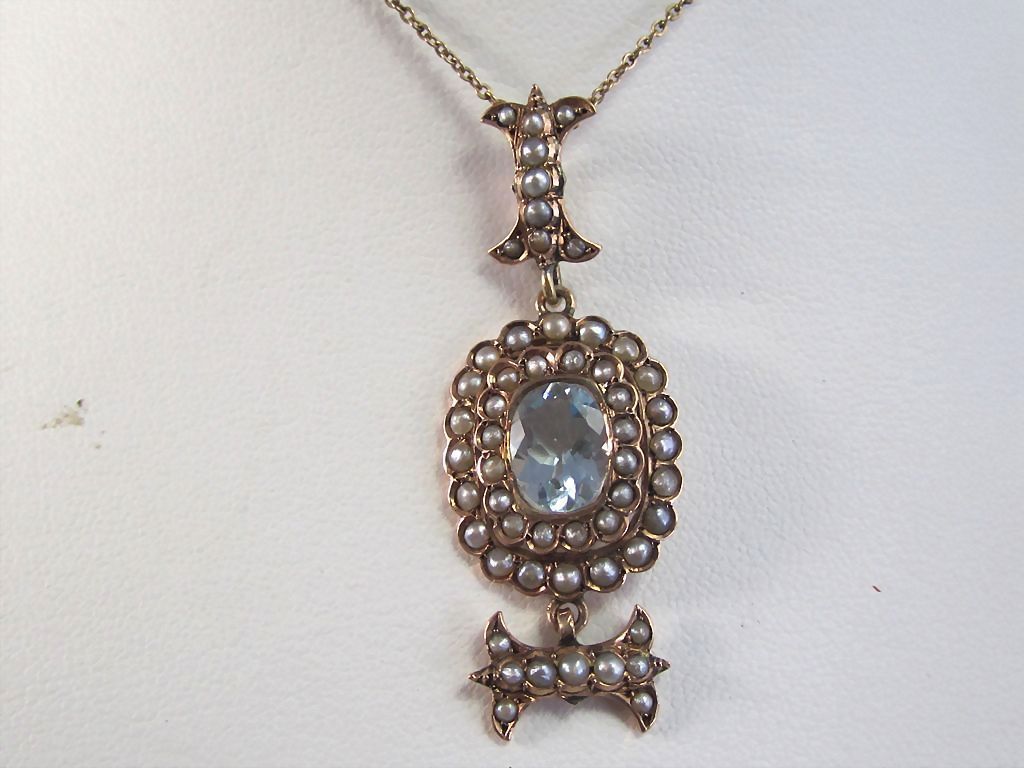 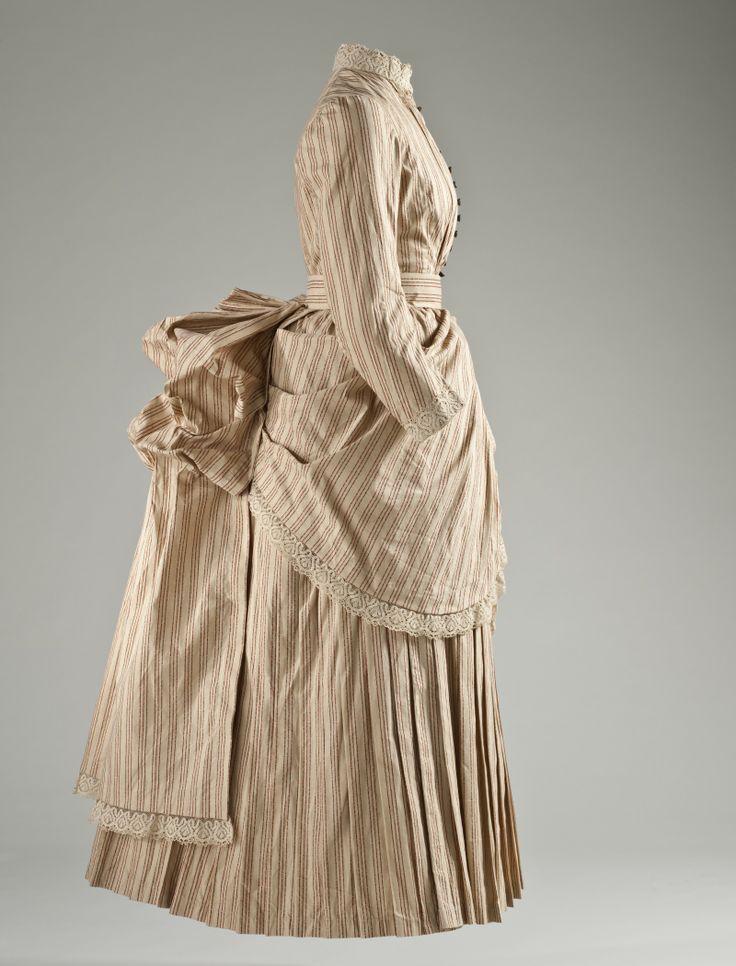 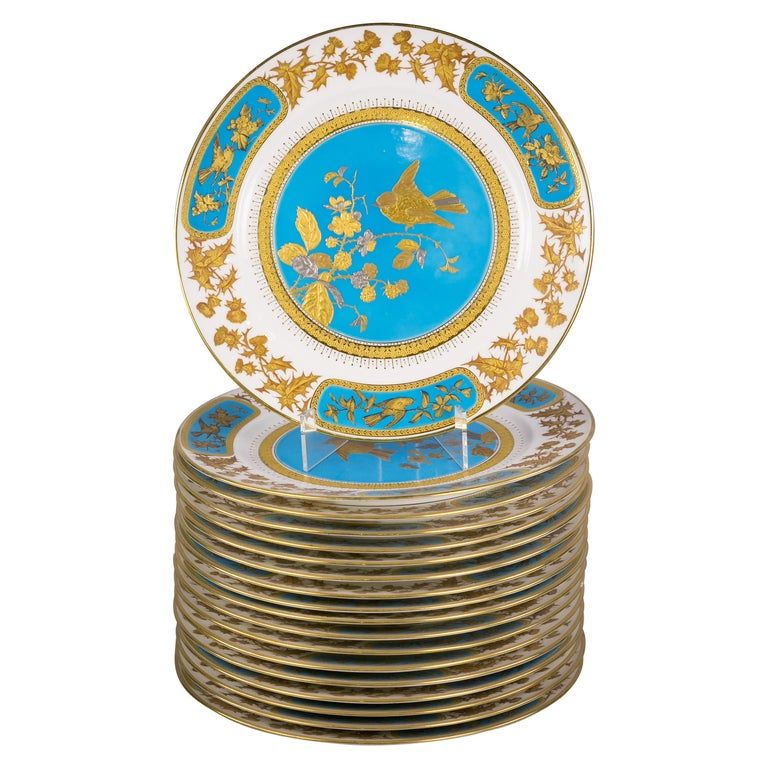 Decorated in gilt and platinum on a turquoise ground. Marked T.C. Brown Westhead Moore and Co. 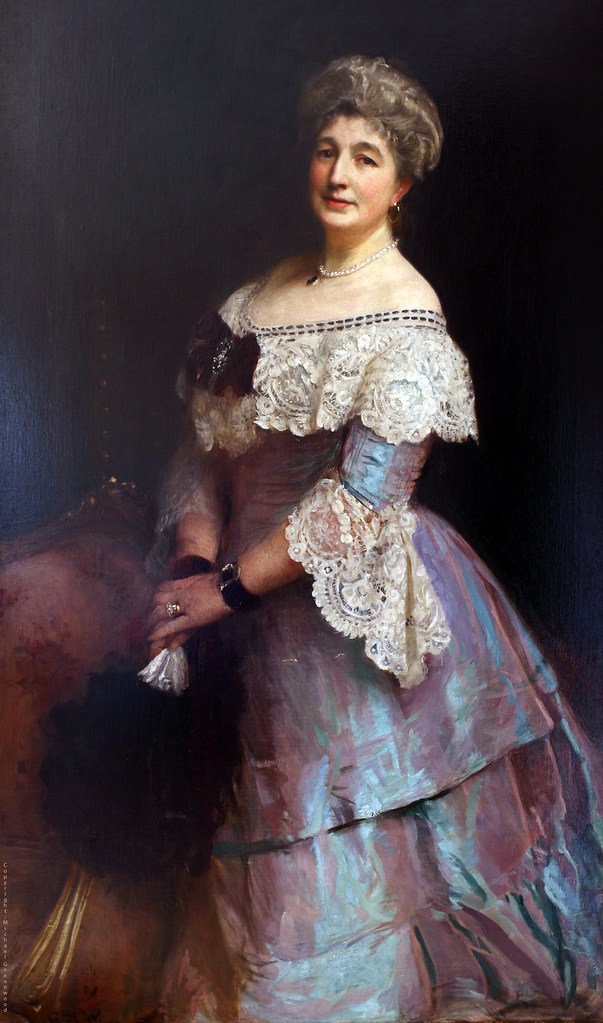 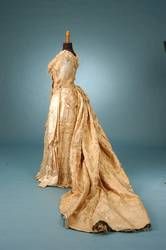 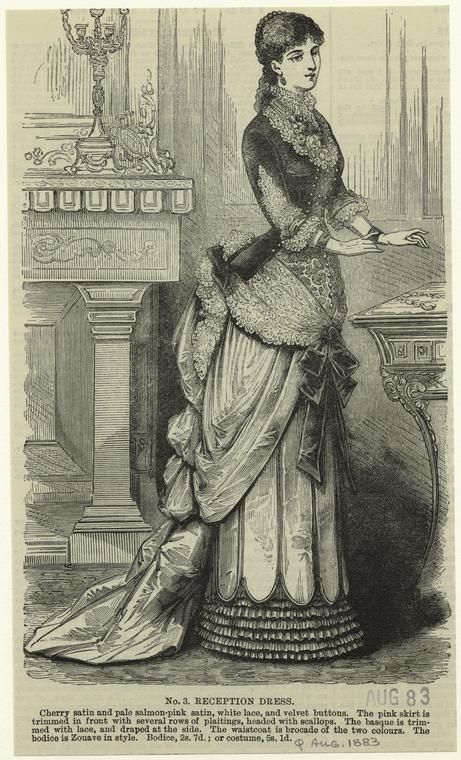 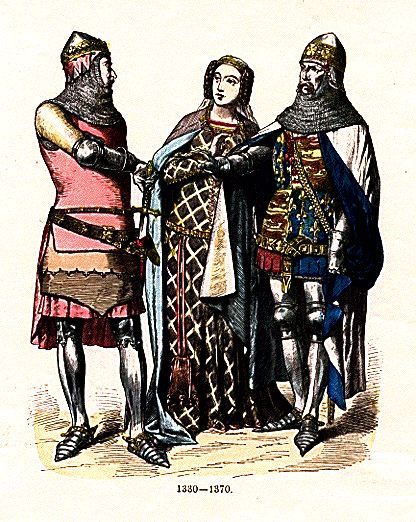 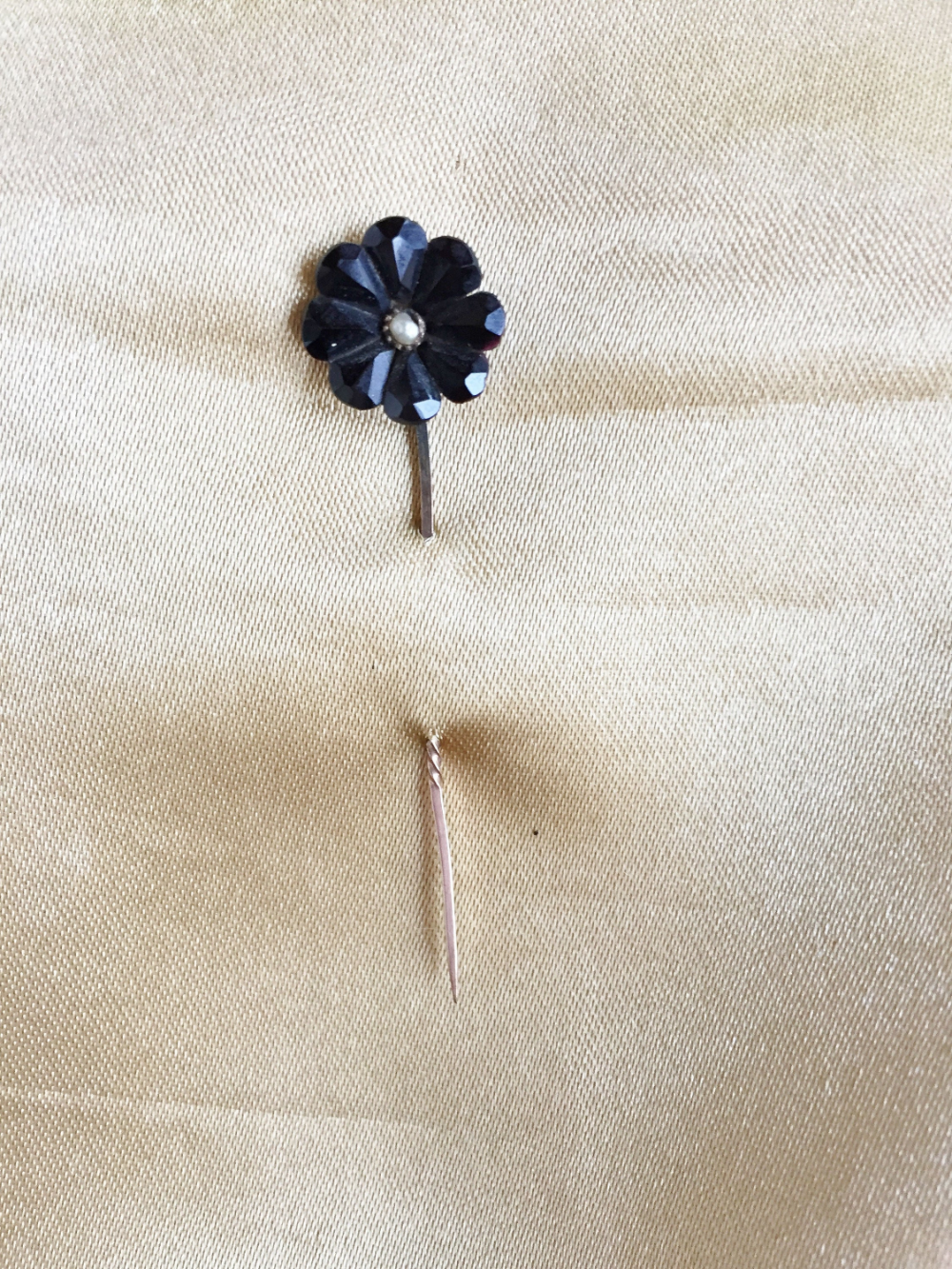 Victorian Stick Pin French Jet for Mourning Here is a sweet little original mid-Victorian era rose gold stick pin of French Jet creating a forget me not with a seed pearl. Pin measures 2" in length, with the top flower portion measuring 1/2" in width. You can date a stick pin by the twist on the center part of the pin. It exists on nearly all pins made prior to 1880. By 1890, nearly all stick pins will have straight shafts and the twist has disappeared. The death of Prince Albert in England, and the over 500,000 deaths of soldiers in the American Civil War elevated mourning to an art form in both the United States and Europe and mourning jewelry was an integral part of the dress of the mourner. Today, these are beautiful and collectible pieces of jewelry. Jet was the gemstone of choice for those that could afford it, and the finest jet in the world comes from Whitby, England. The French, not to be outdone by the British, made beautiful carved black mourning jewelry from glass, which is known as French Jet. The Forget Me Not was representative of undying love and memories to the sentimental Victorians and seed pearls were representative of the tears of the mourner. A stick or tie pin is a neckwear-controlling device, originally worn by wealthy English gentlemen to secure the folds of their cravats. They were first popularized at the beginning of the 19th century. Cravats were made of silk, satin, lace and lightly starched cambric, lawn and muslin, and stickpins were necessary accoutrements to keep these expensive fabrics in place and safe. Stickpins commonly used pearls and other precious gemstones set in gold or other precious metals and were designed specifically for their owners. By the 1860s, wearing cravats had been embraced by the English upper middle classes with a consequently lower quality of materials and designs used in both the neckwear and in the stickpins used to keep it in place, and the fashion soon spread to the United States. As they became more popular, they began being worn by both men and women, either on lapels, ties, or scarves. To see some of my other 20th century vintage pieces - http://www.etsy.com/shop/victoriansentiments?section_id=7179687 I've got a great selection of original Victorian and Georgian era pieces too!